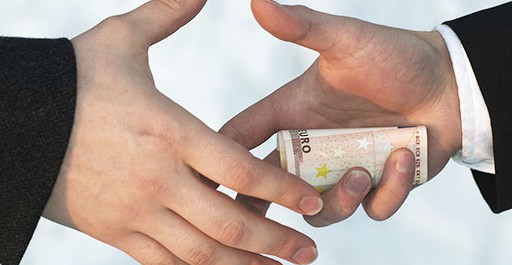 Thailand is often seen as a legally lax country where violations of the law can be settled by giving bribes to government officials for breaches of the law. Many foreigners visiting Thailand can tell a story about how they got out of trouble by paying a few hundred Thai Baht, especially when it comes to traffic violations. Thailand was ranked 85 out of 175 countries in Transparency International’s 2014 Corruption Perceptions Index.

An official policeman in Thailand receives a monthly salary of about 6,000 THB per month (which is about 180 USD). The salary is well below the national average (the minimum wage by law is 300 THB a day), and this is what makes policemen susceptible to bribes. Not just the salary is low, but policemen also must buy their own uniforms, guns and sometimes maintain their own motorcycles. As a consequence, most of the policemen need to rely on the support of their communities in order to sustain their families.

In addition, even if its acceptance is decreasing, bribery is still anchored in the Thai society, especially in the rural areas of Thailand. Many people agree to pay a “sin nam jai” or a “good will gift”, when government officials provide assistance.

Many people do not understand that the punishment for bribery can be severe. The Thai Criminal Code criminalizes both active and passive bribery. For example, according to Section 144, the punishment that may be imposed for the bribing an official is imprisonment up to 5 years or a fine of 10,000 THB, or both. This includes even the offering of a bribe to a policeman or other official can result in jail time.

Officials who wrongfully exercise their power in office, the possible penalties are much stricter. According to Section 148 of the Thai Criminal Code for example, the potential sentence for a conviction can be imprisonment for 5 to 20 years, life imprisonment or even the death penalty. There are other bribery offenses that impose life imprisonment or the death penalty as possible penalties. According to Section 164 of the Thai Criminal Code, the knowledge of corrupt acts alone can bring officials to jail. The passive bribery of persons who accept advantages can also be punished before they are appointed to become officials (Sections 150 and 202 Thai Criminal Code).

The term “official” is not defined in the Criminal Code. The courts are given wide breath to define the term. Judicial Officials are exempt since Sections 167 to 205 of the Criminal Code deal only with offenses relating to public justice. Penalties for bribery of judicial officials are harsher than for regular officials. For example, an attempt to bribe a judicial official, the punishment ranges from imprisonment not exceeding 7 years and a fine not exceeding 14,000 THB (Section 167 Criminal Code).

However convictions for bribery are rare. Courts need evidence or wrongdoing for finding of guilt. In most cases, there are no paper trail. A conviction is more or less improbable. As a reaction to the rather blunt sword of the Thai Criminal Code, Thai authorities meanwhile introduced other ways to fight bribery.

The Organic Act on Counter Corruption of 1999 created the National Anti-Corruption Commission (NACC; previously NCCC). This independent institution was empowered with several tools to fight corruption.

The concept of “unusual wealth” was introduced which stated that officials and politicians must be able to show if they legally earned their property. If the NACC finds indications of corruption, it must pass an investigation report to the Prosecutor General for further criminal prosecution. In addition, the NACC can issue an order immediately freezing that asset.

There are also other Thai laws that address corruption, like the Act Governing Liability for Wrongful Acts of Competent Officers 1996, the Act Regulating the Offense Relating to the Submission of Bids or Tender Offers to Government Agencies, the Thai Official Information Act from 1997 and the Act on the Management of Partnerships and Securities Owned by Ministers from 2000. Even though Thai authorities (and also several NGO’s) have made efforts to fight bribery and corruption in Thailand, the country still struggles with this issue.

Article Name
Bribery in Thailand
Description
Many people do not understand that the punishment for bribery can be severe in Thailand. The Thai Criminal Code criminalizes both active and passive bribery.
Author
Ulrich Schmitt
Publisher Name
Siam Legal International
Publisher Logo